These guides are enlightening, opening our eyes to the inner workings of an overseas visa office. While I won’t share the entire ATIP here, the pages range from discussion on officer working hours, to how to organize files, and importantly how to prescreen and assess temporary resident applicants.

Steve broke the scoop by tweeting the following:

I followed with another tweet, disclosing a few more pages providing greater insight into the way Chinese applicants were viewed by region:

Yesterday, I was interviewed by Ming Pao Newspaper to share my views on the content. The Ming Pao piece (in Mandarin)  has so far stirred a lot of reaction within the Chinese community as individuals debate whether IRCC’s practices are fair in this regard.

I want to take the context of this situation outside of just the Chinese community a little, and share a few more tidbits and why I think this training guide opens up a vulnerability in IRCC’s decision-making process that may face judicial challenges moving forward.

Whether or not files are re-opened because of the revelation that regional discrimination is taking place is  beyond the scope of this post, However, I certainly want to also express my position that regionalism, regional or geographic discrimination, is likely not a reasonable basis for refusal that can be relied on by Canadian immigration officers moving forward. However, at the same time, I question whether it is inevitable given the already inherent biases of our Temporary Resident Visa regime.

What We Learned From the ATIP Results 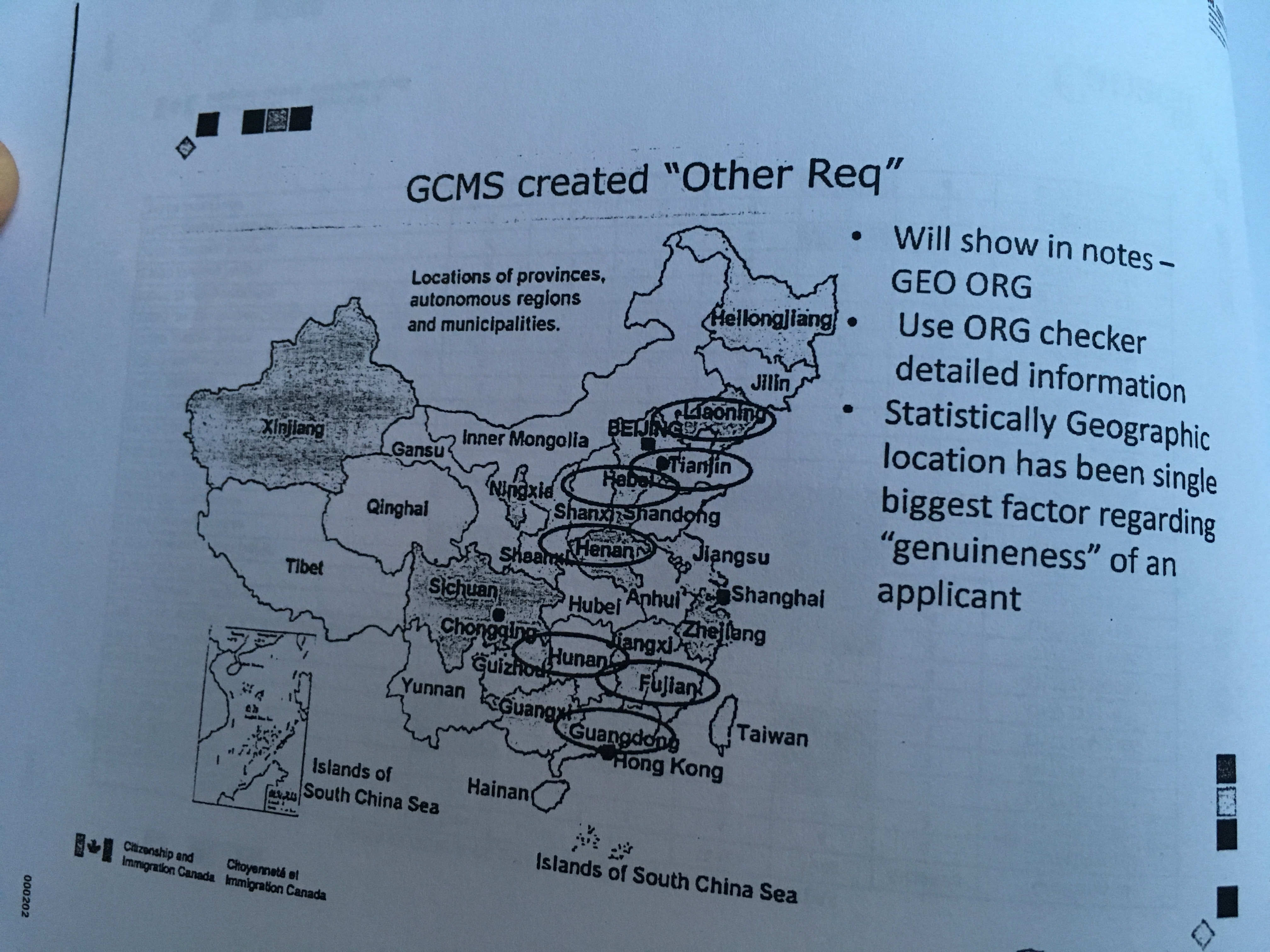 The above map is very important and telling. As I mentioned in my initial tweet, this map is from a training guide titled 2015 while the one Steve posted earlier  was from 2013- 2014. The 2014 one is important for the line that states “40% of claimants (I am assuming this means IRCC applicants) were from the provinces Liaoning, Guangdong, Hebei, Fujian, and Henan. It states further that “borderline” cases should be refused.

The 2015 map is revealing in that it appears to add even more specific detail. In addition to the four above it adds Tianjin (a special economic zone in Northern China) and the province of Hunan. Because of the black and white nature of the ATIP results we cannot see the entire colour scale of the map which in addition to the circled “risk provinces” appears to show a sliding scale of risk.

The side note states that the risk is in regard to “genuineness” which taking it a step further can equate to risk of misrepresentation. Misrepresentation as we know caries with in a 5-year bar and exclusion order and is a finding that often affects Chinese applicants who often times are poorly represented by incompetent counsel.

Overall, as per this chart, these are the provinces where applicants are presumed to have a greater likelihood to be misrepresenting on their applications.

We receive even further insight from the chart below which set out numerically what the risks are. 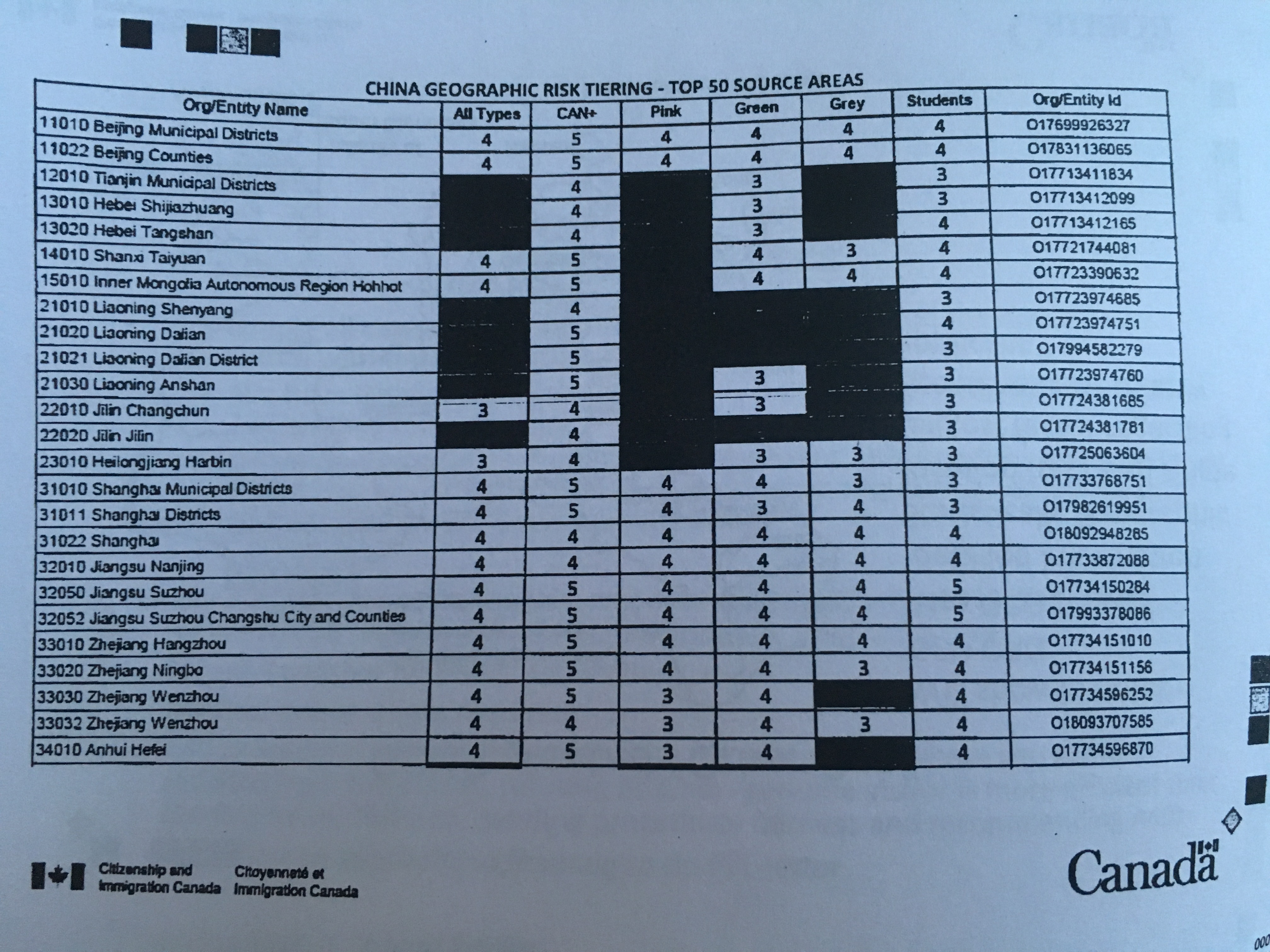 What is fascinating in the above chart is that different cities within the provinces across China are giving numbers reflecting the risk. Again, we don’t have access to the  exact scale or the process by which the numbers are assigned.

However, extrapolating the fact that Beijing and Suzhou receives high numbers and the cities that are/are not redacted, we can assume the higher the number, the lower the risk. The redacted portions therefore reflect therefore the riskiest regions as aligning with the “group of seven” high risk regions.

We also can deduce through this chart what each of the colours and categories represent. 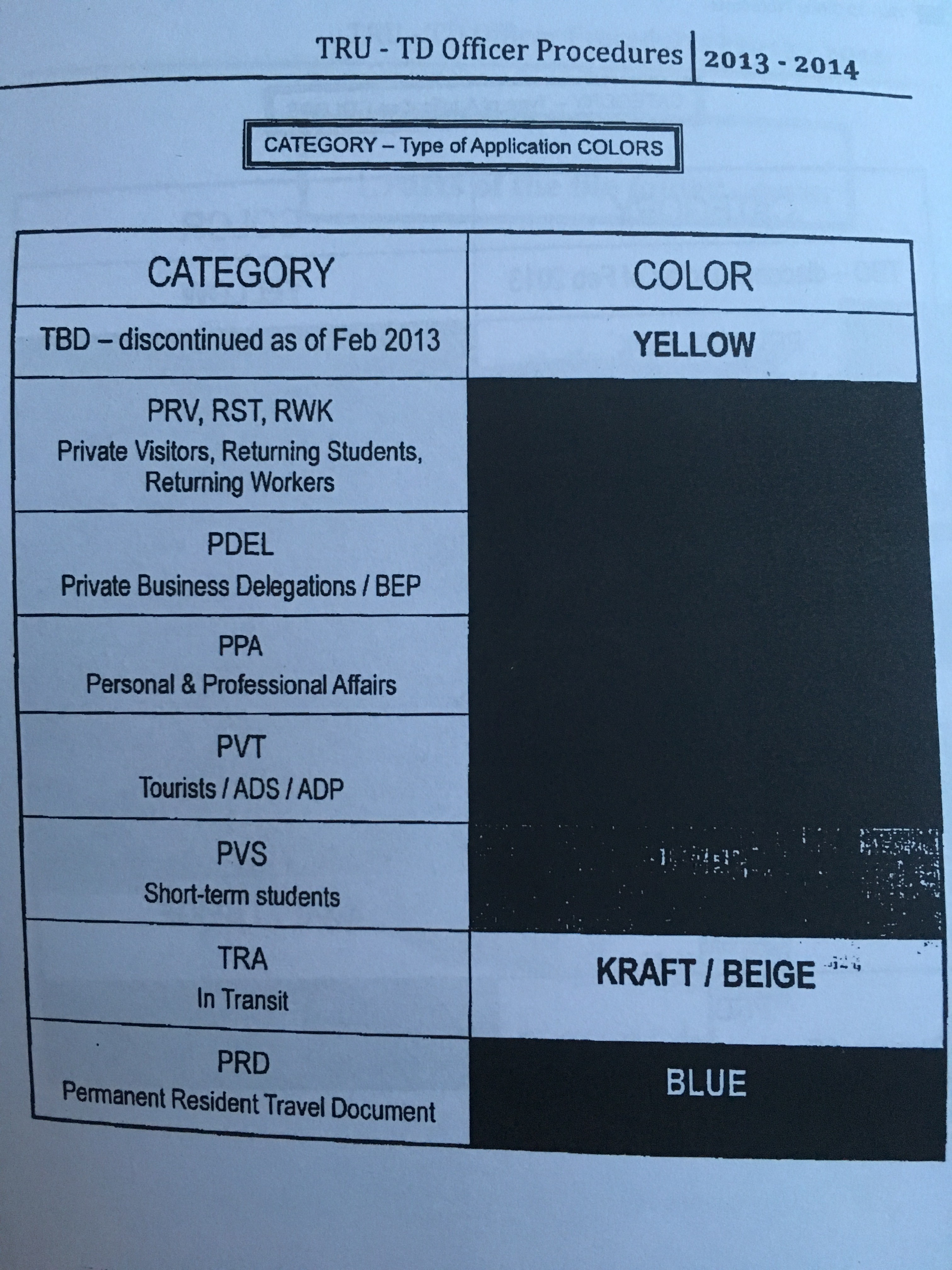 While the above is unfortunately redacted for colour, we see here on another page how the colour coding system works.

Breaking down the categories further

Below the labels clarify further that

Here we can assume the increased risk label in  the chart is put on perceived “tourists” from Tianjin, Hebei, Liaoning, Jilin etc and “private delegations/business” from same.

Notwithstanding  the above, the training materials themselves clarify that Beijing’s approval rate is 87% – giving the perception that this is to be a standard to be met.

Where is the “Genuineness” and “Risk Evidence” coming from?

The first question that pops up is where the evidentiary burden behind this. As IRCC trains their officers and provides them a global map and provinces that they should look out for- what would the answer be if a trainee officer asked – “why Hunan over Yunan?”

Does IRCC have in its coffers a master statistics list of applicants and their hometowns, number of refusal per hometown, and results on appeal?

In the alternative, could the entire basis for the risk factors be on the ground anecdotal data.

What is striking about the list for China is that the regions that are highlighted as being at risk for genuineness are also among the provinces that receive the most regional discrimination from Chinese within China.

For example. the prejudice felt by individual from the central provinces of Henan and Hebei have been covered frequently in Chinese media. See here for example and Dan Harris’s China Law Blog post on regional employment discrimination here.

Is the Chinese media potentially feeding into these perceptions? I don’t find it ironic that within China, I also hear from individual’s on the street similar regional biases to the “dongbeiren” of the North for being more aggressive and harder to deal with, or the “central chinese” as being farmers, or the Cantonese being “shady.”  How much are these stereotypes (purely prejudicial comments with no factual  basis) seeping into Chinese policy?

The Global Risk Tiering chart is fascinating. Each city appears to have a country code and the codes appear to be hundreds of numbers off assuming there are more than just the  list here. The ORG/Entity classification code appears to mirror almost a Designated Learning Institute Code.

If I were to select Jalandhar, Manila, or Tehran would I get results? Would there be a similar number system?

Are these practice utilized by Beijing in their visa office unique to the visa office or shared across different visa offices? Particularly, in this day and age where applicants primarily apply online and IRCC has the ability to process in Canada or send abroad to any visa office,  what roles do the risk tiering chart play (potentially in place of on the ground knowledge)?

What if I am from a “genuineness” risk Province and my application is refused?

If these cases where positive and negative temporary residence factors both exist and the difference maker is based on the province the applicant is from, I would argue procedural fairness and reasonableness issues both may be triggered in challenging refusals.

From a procedural fairness perspective, I would argue that this risk tiering chart would be considered extrinsic evidence not available to the Applicant. It could not be reasonably expected that the Applicant is aware that their region of residence is particularly at risk unless the charts were made public (which would have never occurred but for this ATIP). A lack of genuineness if equated to a “lack of credibility” may also trigger the requirement for concerns to be put directly to the Applicant rather than immediately refusing as the training guide suggests. If refused, the Applicant could argue that they were not given a reasonable opportunity to respond to the credibility issues.

From a reasonableness standard, as highlighted by the recent decision of the Supreme Court of Canada in Kanthasamy, it is not reasonable, and a fettering of discretion, to treat IRCC policy as a legal standard.

So far, issues such as travel history (which cannot be a stand-alone reason for refusal) have been tied into the issue of ties to the home country as a permissible contributor to refusals. I would suggest that regionalism as a factor for refusal begins to create major challenges for IRCC as it would be difficult to link the fact an applicant is from a certain part of a country as evidence that they would not leave Canada or would not comply with the terms of their stay in Canada. I think fettering discretion is a serious consideration in these cases.

As I mentioned in the Ming Pao piece, I see this ATIP as the tip of the iceberg. I have a feeling that there may be grounds for opening several files to look at how the temporary resident factors were balanced in the decision.