Recently in Sbayti v. Canada (MCI), 2019 FC 1296, Justice Pamel (a recent appointee to the Federal Court earlier this year) had a bit of a field day with IRCC’s forms and processes. In this case, an individual who was in a grey-area situation with respect to a previous departure/possible removal from the United States was unable to properly answer a check box “yes/no” question while providing an explanation.  Justice Pamel allowed the judicial review and found the Officer’s assessment unreasonable.

This case got me thinking – what are some of the ways IRCC can change their forms to make it user friendly? I have five ideas of where to start.

1) A Catch All Box at the End of Forms

The challenge cited by Justice Pamel comes from forms that turn many questions that are of some confusion to an applicant into a binary “Yes” or “No”. The answering of “No” then greys out the box that allows you to provide any explanation. 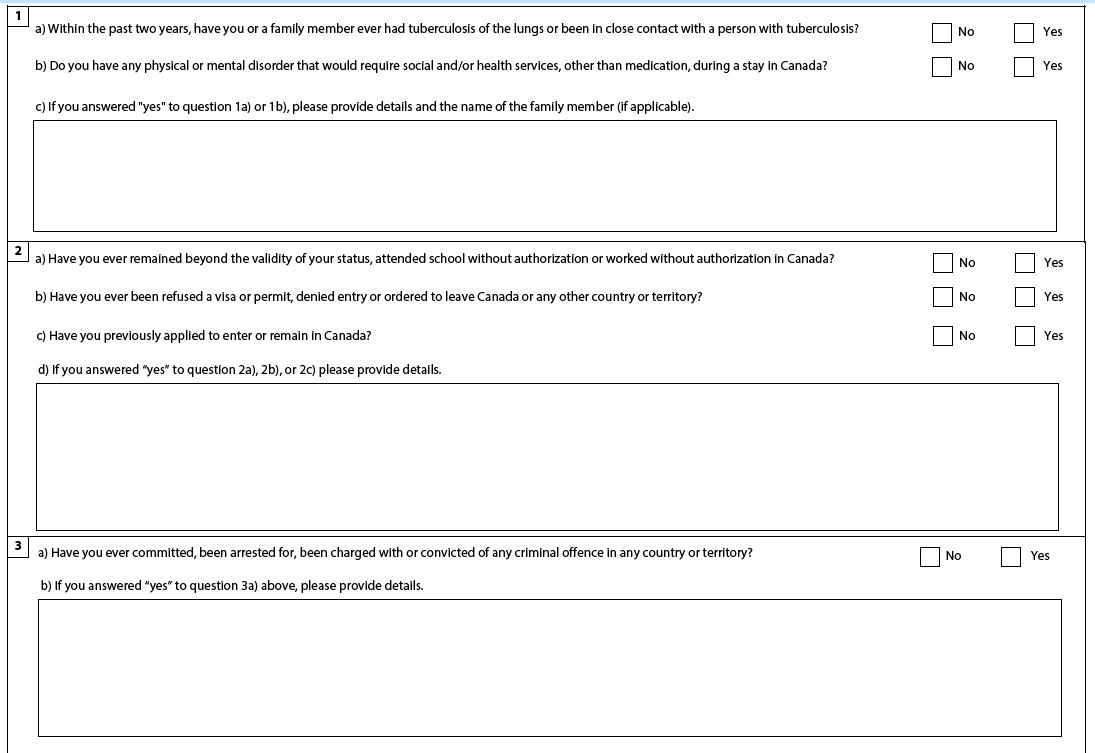 One of the immediate solutions that I would suggest is to adopt what is currently being used in the IMM 5532 relationship box to ask clients if they have anything else they would like to share. Adding a catch all box could also serve to gather some of the important information to dig into compliance-related data and positive disclosure.

Again, because self-represented clients get a “Client Information” instead of a “Representative Submission” box [which I argue a separate “Cover Letter” section may be appropriate as well], these further explanations can often be missed throughout the application. A catch-all box on  a form would provide that added benefit, although possibly will provide challenges to the ways applications are filtered and triaged.

As you may know many individuals are being found inadmissible for misrepresentation for mistakes that arise out of what are more akin to uncertainties. This has a dual benefit of giving clients  space to express uncertainty but also giving further proof that a second question was reviewed and answered before alleging an individual was not truthful or made a material omission. Counsel will likely continue to utilize submission letters but for self-reps this will be a major added benefit.

I have recently done a talk and am drafting an introductory article on how privigration (i.e. the meeting of privacy law and immigration law) is one of the most under-studied yet on the up and up areas. Via our interactions with border officers (which now will involve exit controls) and immigration application forms, our information is transferred through ‘personal information banks’ (PIBs)  to different government agencies and could be used for a variety of purposes that may or may not be justifiable under the Privacy Act. Right now this information is disseminated via small barely visible box. The number of different PIBs in which information from a migrant is being shared would astound the lay-person. Indeed, through the Gazette’s and various pieces put out by IRCC and CBSA that a major part of these changes are to increase cross-collaboration to track those who are abusing government social services. It also increases the tracking on refugees and other vulnerable migrants. There needs to be transparency around this and either the forms or accompanying instructions should provide that.

One of the major challenges with temporary resident refusals is that the form does not contain full and detailed reasons to allow an individual to, in most times, even begin to address their refusals. Individuals need to file Access to Information requests that can take lengthy periods of time and for those without Canadian contacts or addresses be nearly impossible to submit.

I would suggest that IRCC move to a model other than the bullet point or the check boxes and into one where a small box where the Officer’s reasons can be copy and pasted from GCMS. This would decrease the strain on the ATIP system and allow applicants a clearer window on to how a new application can assist them. The unforeseen consequences of a system where applicants are denied these reasons is not only their lack of knowledge of judicial review and reconsideration as pathways but the continued exploitation at the hands of agents who are able to coax new applications and fees on the basis of ‘a few less check boxes’ to go.

It is not clear, as well, particularly in the context of Canadian refusals that written reasons can be requested. When you also place a 15-day time limit on judicial review and then refuse with no reasons it creates major procedural fairness issues for applicants to know the case to be met.

My solution would be to add a box and copy what is usually in the GCMS notes of the Officer – to put that section forward and let the applicants know. It cannot be up to counsel to advise their clients to know that this can be done, particularly where refusal letters are silent.

4) A Separate Uploading Section for Attachments to IMM Forms;

Online uploading is another notorious challenge. IRCC has made some major improvements (especially through their Express Entry portal) in clarifying where certain things are to be uploaded. One of the ones where I think changes can be made is in either making many of the standard forms drop down for the 10 year Personal History or else create a clear template/upload for the Attachments that we often add.

The consequences of not having this upload/process apparent are two-fold. First, applicants are unaware that failure to disclose relevant work/employment/volunteer history could have major consequences as they interface with permanent residence applications. Second, visa officers have consistently missed when these attachments are added to submission letters. Third-party Visa Application Centres (“VAC”) can through communication mistakes mis-shuffle/accidentally remove these important attachments.

With workers and vulnerable students, there major concerns that revolve around particularly mental health (for both), attendance/continuous employment (for , and also for workers, whether or not they have “worked without authorization.” The problem with all three of these are that neither the forms or law provide clarity on the best manner of disclosure on the forms. When is a student required to disclose they are not ‘actively pursuing’ studies? This would not be considered “attending school without authorization” by technical definition.

Similarly, if a worker may be uncertain whether or not their employment is unauthorized if those contours are not made readily available how is work without authorization self-declared? The forms should not create a punitive ‘all-or-nothing’ proposition but instead serve to genuinely provide transmission for concerns and possibly corrections.

The same goes with mental health issues. I will do another blog specifically about the interaction with disclosure and admissibility challenges but the nature of the form continues the historical discrimination against those with mental health related challenges. It creates uncertainty.

It is my recommendation that IRCC provides separate instructions for the admissibility. Whether or not this reassures students at the very least it adds some clarity as to what should be disclosed and what possibly does not need to. Especially because these form questions are connected to triaging and possible delays. It would also strengthen the case for misrepresentation and lead to less confusion for students.