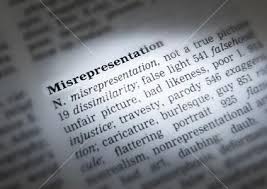 As I have covered in previous blogs on the topic, I believe Misrepresentation under s.40 of the Immigration and Refugee Protections Act [IRPA] is the new tool that CIC will be increasingly using to defend program integrity.

The penalty for misrepresentation used to be only two years, only a year greater than the penalty resulting from an exclusion order and almost negligible in the case of Applicant filing a Permanent Resident Application to benefit from processing during the two years.

Now with a 5-year bar and the inability to file a PR Application during the 5 years, a misrepresentation finding against an Applicant (or the spouse of the Applicant) has serious consequences and can act as both a punitive and deterrent measure of our immigration system.

Just recently, the Canada Border Services Agency (CBSA) in a news release, raised a very interesting scenario that caught many  of us in the immigration bar a little by surprise. Generally, misrepresentation cases that are brought to light by CBSA (or that we hear of in the media/case law) involve some sort of illegal human-trafficking or illegal immigration scheme. These individuals have generally not been the Applicants themselves and their wrong-doing has affected the general public in a detrimental way.

On June 29, 2015, a Senegalese resident Momar Diba, was found guilty of misrepresentation and charged under ss. 127(a) of IRPA. On June 16, 2014 Mr. Diba had attempted to gain entry into New Brunswick where he was referred to secondary inspection.  During that inspection, it was discovered that Mr. Diba had offered to pay a New Brunswick woman money to marry him so he could stay in Canada.

To many, this case seems like a classic s.40 misrepresentation case, where the individual would be referred to the Immigration Division and sent packing shortly thereafter with a 5-year bar in hand. So what made this more than that?

Comparing the legislative language, it appears that the main distinguishing factor between an s.40 inadmissiblity and an s.127 offense is knowledge of the misrepresentation.

MISREPRESENTATION – No person shall knowingly

(a) directly or indirectly misrepresent or withhold material facts relating to a relevant matter that induces or could induce an error in the administration of this Act;

(b) communicate, directly or indirectly, by any false or misleading information or declarations with an intent to induce or deter immigration to Canada;

(c) refuse to be sworn or to affirm or declare, as the case may be, or to answer a question put to the person at an exaination or at a proceeding held under this Act;

Knowledge of misrepresentation is not a requirement for s.40. Consequentially, I think the main differentiating factor between the inadmissibility and the offense is this mens reus element.

What does this all mean?

My assessment of the situation is that in cases where CIC believes the Applicant is knowingly misrepresenting or withholding material facts and where the facts are egregious, misrepresentation charges will be pursued in addition to the inadmissibility allowing for a deportation order to be made. A deportation order bars the return of a foreign national to Canada without authorization.