In an earlier post last year I predicted that the Electronic Travel Authorization (eTA program) may end up being akin to “visas for the visa-exempt.”

True to form, even with the leniency period having been extended until September 29, I have started to see the eTA program became a major barrier for several foreign nationals seeking to enter Canada. These are individuals who prior to the introduction of the eTA had no problem entering Canada and are now flagged by the eTA’s computer-generated system.

The fundamental theory behind the eTA is I think an agreeable one. Up until recently, Canada had no way of tracking the entry of foreign nationals until they arrived at our Borders. Without information in advance, it was difficult for a Canada Border Services Agency officer to prevent individuals who were inadmissible to Canada, Specifically, I am a fan of asking an Applicant to self-disclose where inadmissibility issues are involved. This is preferable to solely using information sharing and creates a more transparent, fair system.

Whether or not you believe the eTA system is agreeable overall, the eTA also represents an important commitment made by Canada to the United States as part of the Beyond the Border: A Shared Vision for Perimeter Security and Economic Competitiveness initiative. Needless to say, it won’t go away anytime soon. Particularly with Canada having recently added several countries, most notably Mexico, to her visa-exempt list,  I suspect the processing of eTAs will only be more scrutinized and lead to more challenges moving forawrd.

That being said, I believe the eTA system needs to be fixed up before it is officially rolled out on September 29, 2016

My Issues with the Current eTA Application System

Currently, the eTA system runs like a self-declared online survey.

Here-in lies the first problem, in my mind. Given the importance of the information contained within, and the fact that an individual is expressly warned that they made be responsible for misrepresentation if they provide false and inaccurate information, I believe the system needs to require everyone to create a MyCIC account and to submit this application through a secure portal. Right not individuals who create eTA profiles and then wish to “link” it to their MyCIC accounts have to jump through multiple hoops to request the linking, often leading to long delays and sometimes even refusals.

The second issue, is that the questions themselves do not lend themselves to enough space for an individual to explain themselves. Under the current system, it appears that refusal of entries or visas to other countries are enough to trigger the longer process.

However, not enough space is provided to adequately explain situations, particularly for individuals who may have a long travel history with more than a few, non-consequential refusals. Similarly for criminal charges or arrests, there is little room to adequately explain why an individual may not be inadmissible. One must essentially submit an eTA to await a battle rather than be able to pre-empt the concerns as they would be able to in a temporary resident visa (“TRV”) application.

The third issue, once an eTA application triggers a request for further information, is that the time provided for such a response is painfully short. Seven days, particularly where linking an account itself can take two to three days, does not provide enough procedural fairness. – particularly where allegations of failing to disclose refusals or suggestions that the Applicant does not have adequate ties to their own home country or proof of funds comes to play.

The larger theoretical question, issue number four, is why for individuals who have refusals or inadmissibility that may not at all be related to Canadian immigration (e.g. a refusal from a third country with an entirely different immigration system), suddenly transforms the eTA into a Temporary Resident Visa application.

In my mind, an individual who has not found inadmissible to Canada should not have to submit the same (and in reality even more documentation) than an individual from a TRV-exempt country.  I don’t think, for example, that an individual’s history of refusals to the United States, Australia, or the U.K. should have an automatic baring on their entry into Canada.

This is where, I think it should be left up to Border Services Officers to allow the Applicant in after questioning at the Border. I have already been contacted by a few clients who had previously traveled to Canada on a regular basis with no problem, triggered now only by the eTA system’s survey of past refusals from other countries. I think if the eTA system itself already triggers a warning and advises the passenger that they will be asked further questions at the Port of Entry that this should be enough to serve the eTA’s dual deterrence and expeditious processing purposes.

I do also note that the way the eTA system currently works, there is no room for an Applicant to upload counsel’s submissions. There should be another column allowing for additional information to be submitted by the Applicant.

The fifth, and final issue, is timing and communication. The way the eTA is advertised now as a seven dollar application that should be processed in minutes gives the impression that an applicant can complete this process a day or at the most a week before their flight. 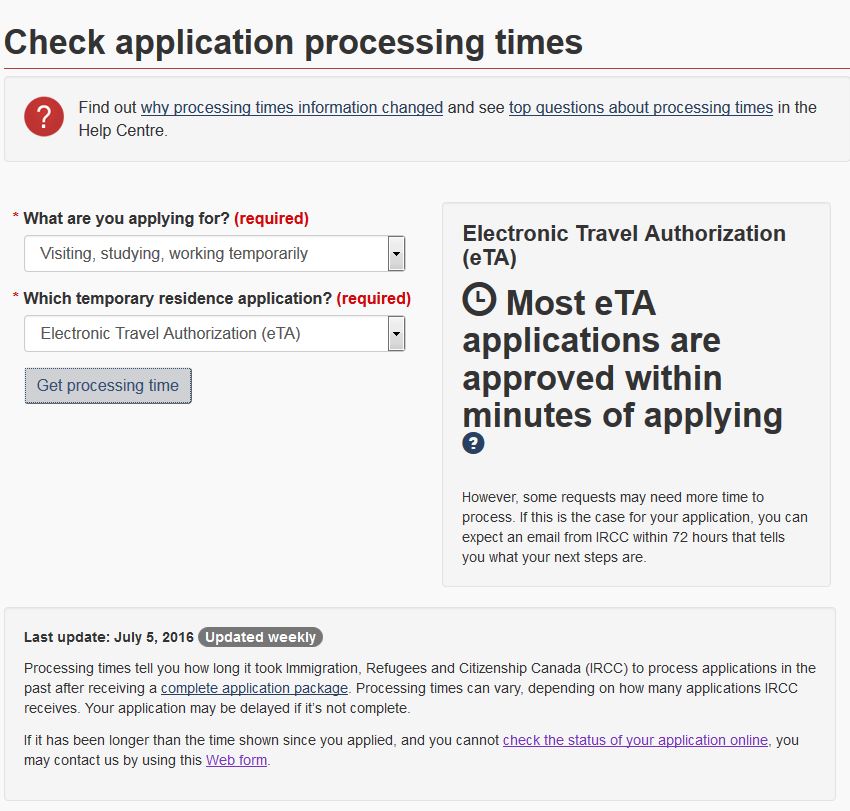 In reality, this process can be a battle of attrition and there are no clear timelines or processes to appeal or seek expedition. I don’t think judicial review should be the administrative solution to eTA refusals and I think IRCC should implement some sort of review/appeal process to ensure the eTA does not begin to hinder the important global mobility processes that occur every day.

Like any new system, I think the eTA is a work in progress. I think the rationale is fundamentally sound but the execution can be improved drastically.

Your thoughts on the above?