Today’s post is dedicated to a friend and mentor of mine. I’ve seen a lot of good facilitators (half my network are or have experience as professional facilitators) but this week, and in the context of the new online COVID reality, I saw another display of the best.

In this piece I want to walk through what made Miranda such an amazing facilitator. She does this for her professional work but only one of a million hats she wears. I want to break down how she facilitated and what made it so effective.

As a background I have been a part of a few conversations on creating equitable online space this week. Below are some strategies that Miranda employed that I highly recommend all of you to consider to do the same, particularly when working in diverse

Giving Adequate Space and Time to Settle In

Online spaces tend to put pressure on individuals who not only have to speak but watch themselves speak or appear in real time. Giving space and time for individuals to settle in and feel comfortable is crucial. Not everyone will be sitting formally at a desk, some may be on the floor, others in tight corners of quiet. Miranda led us in an exercise to take a few breaths and shake out the tension at the beginning. We all looked silly but we settled quickly into our true online selves.

During this time, many individuals may not be able to find an entirely private space, may not be able to use laptops (having to call in from cell phone) or calling from small private spaces that they are uncomfortable sharing. Family homes are innately private. The requirement to show one’s face at all times or look a certain way can creates pressure and stress in a space that should be stress free. Family members and children may need to enter the space, while doing their own calls, chores, and play activities.

While everyone at this meeting turned on their camera, it was made clear from the beginning through Miranda’s facilitation that eating and child-rearing while meeting would be completely acceptable. That level of comfortability and understanding was very facilitative of the different personal backgrounds and situations of attendees.

Check-Ins (But Not Forcing It)

The provision of alternative ways to share, such as using the chat box (for those who prefer to write) and as well share documents (which allow for anonymous participation). Many chats or verbal communication options require individuals to assign their name to comments, which makes it difficult for individuals to ask the difficult questions that often need to be asked. Creating a parallel anonymous document is a very effective tool, one that I saw implemented a few times in effective Zoom meetings this week.

Miranda’s check-in process of assuring again that there was no pressure and that there were alternative venues was very effective. No one was put on the spot. The silence of a minute of no one sharing was embraced not frowned upon. Eventually everything one did share and it was a very moving and important process of re-connecting after so much time apart.

Recognizing the Power Structures and Structural Imbalances of Virtual Space

Many times Zoom meetings can recreate the skewed power dynamics within organizations. For example, one person or a few persons could ‘hijack’ Zoom (as the online wording goes). On the other hand, too strict controls on muting participants and requiring raised hands in order to speak can also stifle participation.

It is very effective to introduce a few shared ground rules on muting mics when an individual is not speaking and also facilitating feedback from those members who may feel as though their contribution is less welcome. Where individuals are speaking too much, as demonstrated by their face/icon showing up too often on the brady bunch screen. I actually prefer putting my screen in a mode where I can see all participants at once instead of a rotating line up in the top.

Those who do facilitate and speak should be cognisant as well of dynamics such as accessibility. I was part of a few zoom calls that addressed that – one with real time closed captioning, and another with a transcript to be made available after the presentation. Facilitation becomes all the more additionally important because  with computer lag times and perhaps a less clear ‘order’ of participants, talking over each other or interrupting become all the more common-place.

Miranda was fantastic in giving space, soliciting broader feedback, but also giving time for us to think through questions virtually. Miranda also held us very accountable to time and to our other commitments as well. As someone newer to the team, I felt very much heard.

I have been part of other Zoom calls this week where that was not the case and those facilitating could have done a better job of inserting their ability to solicit broader feedback. We should also recognize that online space can re-produce power dynamics of one or two leaders speaking and everyone not being engaged.

Utilizing surveys or even just acknowledging the space as being different and possibly oppressive and uncomfortable helps facilitate the feeling out process of utilizing these apps.

There are some incredible tech functions that allow for the use of breakout room functions to separate participants into different groups and to return back for a larger conversation. This is particularly good to increase participant interaction and work through problems in the similar way in-person breakout sessions or one-on-ones.

During our particular meeting we did not break out but, we had a portion where it was important to have decisions and discussions without certain attendees there. Miranda did a great job of facilitating the transparency of the transition between the larger team meeting and the departure of the members for that portion. It is important when doing actions such as this that it does not turn into a point of concern and tension but rather facilitated.

Closing of these meetings are important. Of all the Zoom meetings I’ve attended almost all of them have gone over time. Individuals will need to transition from these meetings into actions, actions which may they be less motivated to engage on without the in-person collaboration.

Miranda was again fantastic at thanking people (and their families) broadly and specifically. I left feeling truly part of a tight knit POC family.

I hope this piece was useful for some of you! TTFN and Happy Zoom, Skype, WebEx, NextCloud, Canvas-ing! 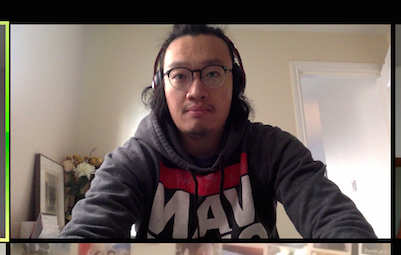