In  the recent case of Omijie v. Canada (Citizenship and Immigration) 2018 FC 878 [CanLII link], Mr. Omijie is a 26-year old citizen of Nigeria who sought to study at Alberta’s NAIT for a Bachelors of Business Administration program after he had previously graduated, three years prior, from a Bachelors of Science from a university in Nigeria. Mr. Omijie’s student permit application was rejected, and not for the first time [as will be discussed below].

This case highlights the dilemma faced by many study permit applicants, particularly from countries such as Nigeria, where the last figures we have from January – March 2017 show that the number of successful applicants (371) compared to unsuccessful (2,174) and total applications lodged (2,545) leads to a 14.5% success rate.

I would assume that rate has worsened since with the volume of students seeking entry into Canada from all over the world.

One of the major issues under scrutiny was the fact that the Applicant was seeking a degree to continue studies in a related area at a related level.

It is also important to put into context that the Applicant’s study permit refusal had already gone back once to the visa office for reconsideration after a decision by Justice Diner. The reason it was sent back by the Federal Court was due to (as we will see also from this decision) a lack of explanation for why the “educational and employment history” was problematic.  As summarized in this decision about the first judicial review: 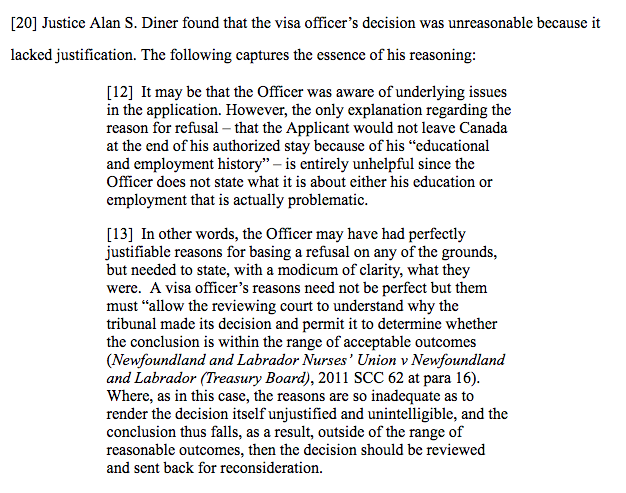 Justice Pentney (former Deputy Minister of Justice and Deputy Attorney General of Canada many of those practicing will recognize from filing previous Judicial Reviews) made two very interesting points, set out over three paragraphs of his decision, as to why judicial review should be granted and the matter sent back to the visa office for redetermination.

In paragraph 23, Justice Pentney exams the evidence that was put forth by the Applicant for explaining why he wishes to pursue studies in Canada – specifically a desire to pursue hands-on, practical, and technologically advanced training.  The Visa Officer does not question the evidence provided but finds fault in the cost of relocating to Canada to undertake study at the same financial level. 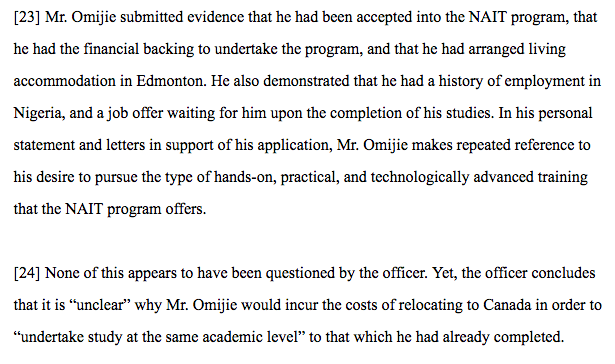 This is very common among international students who do often come with Bachelor’s or ther advanced degrees from abroad but wish to gain Canadian specific qualifications which may require them to start at a lower level or pursue diplomas. 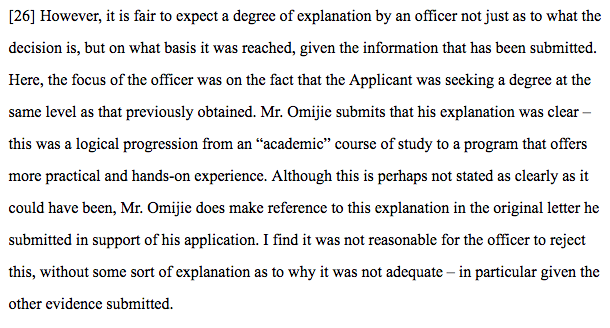 Justice Pentney acknowledges that the Applicant may not have set out the grounds of why there was a logical progression between the two studies clearly but that the Officer’s decision to reject what was presented without adequate explanation was itself unreasonable.

A recent trend of overseas visa office refusals that I have seen (both on the student and TRV side) is that the decisions are generally becoming more and more trite, with less and less reference to evidence provided. While a decision-maker is presumed to have reviewed all evidence, silence with respect to evidence that can corroborate the Applicant’s statements and that directly contradicts the visa officer’s decision, can render a decision unreasonable.

That being said, with judicial review being a costly procedure, and with the possibility that matters such as these can end up in a loop of judicial reviews and refusals, it is pertinent to put the best foot forward in the first application and make it abundantly clear how the Applicant meets the statutory and regulatory requirements of a bona fide student (or visitor as the case may be) that will leave Canada at the end of their stay.  In this matter, reference to policy and to previous refusals (if any) is crucial. Whether it is putting a succinct cover letter or organizing the online submission in a manner where the visa officer  is clear as to where documents are located, these small steps when a visa officer has only a few minutes to review a file and render a decision, goes a long way.

The Omijie decision also highlights another issue (and common point of misunderstanding) for those who pursue judicial review and expect that either the process will allow the judge to grant the study permit or else that once it is returned for reconsideration a student permit will be shortly granted.

As discussed by Justice Pentney, granting the study permit (which was sought b y counsel) is simply not an available remedy.

(3) On an application for judicial review, the Federal Court may

In a case of this nature there has been no unlawful failure, refusal, or delay in performing the act of approving a study permit under (a), this is clearly a case of (b) where the setting aside for the re-determination is the only appropriate remedy.

Back at the visa office, it is likely (but not always the case) that the Applicant will be granted the opportunity to provide further documentation. The Applicant will need to re-demonstrate that they still hold an LOA to this program, and likely update (in a matter such as this one) proof of finances, study plan, etc.

With the Federal Court now having clearly indicated that the missing piece appears to be the brevity of the decision and no indication why the Officer found the Applicant’s failure, it would be very likely for a more detailed examination of why the Applicant’s study plan fell short. In the alternative, other areas of the decision could be re-examined (proof of finances, etc.), and possibly even an interview set up to determine the Applicant’s credibility in presenting this plan, in person. The other option is for the Visa Officer to simply stop the litigious process and approve the study permit application. Again, neither option is clearly guaranteed through a process like this.

Too often, unauthorized or underqualified representatives will never advise judicial review and end up having their client go through a slew of repetitive refusals that very much harm the prospective chances of ever getting a temporary resident visa.  If not early on, at a certain point in time, there needs to be an acknowledgment of whether the application deficiency is a factual one (i.e. the facts are bad and can’t be fit to meet the requirements – but can also be “improved” upon) or if there are legal deficiencies that lead a visa officer to be unable to budge on their interpretation of the law. In the later case, judicial review (and the heavy expenses that go with this process) may be the only way to go.

I will be posting other cases of judicial reviews in a second (Summer 2018 in International Student Federal Court Litigation) so you will better see the nuances of how the Federal Court process works.