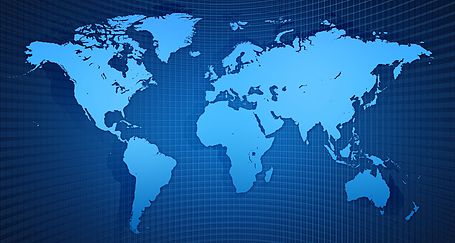 As Canadian students ease their way back into studies and as school staff and administrators start thinking about the million responsibilities that come with a new cohort of international students, I thought it would be useful to review Federal Court Case Law over the past few months and uncover a few points.

I will focus on four points.

[1] PGWP regime not unconstitutionally vague, does not trigger s.7, and refusing a graduate from a private institution that was  not eligible under guidelines, not unreasonable. – Brown v. Canada (Citizenship and Immigration)  2018 FC 452 [link to decision] – Manson J. presiding.

Jeremiah Eastman (a former DOJ lawyer for over 11 years)  appeared to make a valiant effort attacking the PGWP regime from all sides, but Manson J upheld the reasonableness of the decision and constitutionality of the PGWP regime. It is important to note that IRCC has now proactively addressed the issue at the heart of this matter by adding a list that sets out whether the DLI is PGWP-eligible and/or if certain programs offered are eligible.

[2] In the context of the requirement of  “actively-pursuing studies,” it is often parallel proceedings that will trigger investigation. CBSA Officers found to have broad discretion by Courts.  – Kone v. Canada (Citizenship and Immigration) 2018 FC 845 [link to decision] – Locke J. presiding.

Kone is a fascinating decision because it occurs in a context that I have lectured on for several years in my international student presentations. The Actively-Pursuing Studies requirement (which I have written about several times as being problematic) is most problematic when triggered by CBSA. There are many cases of international students who have missed one or two semesters (due to scheduling/health issues) but have not had issues entering new programs or getting student renewals. Kone gets triggered, not by an investigation into his studies initially, but by a related fraud matter where he is arrested.

Once this occurs, the books become open and the actively-pursuing studies allegation was sought after. We have seen this occur in other contexts as well – border entry incidents, criminal charges, arrests, etc.

The individual at that stage is often in a situation where their ability to provide further explanation is compromised. IRCC’s own process (triggered by compliance reporting and their own investigations) is much more fairer and consists of a PFL that often looks like this. 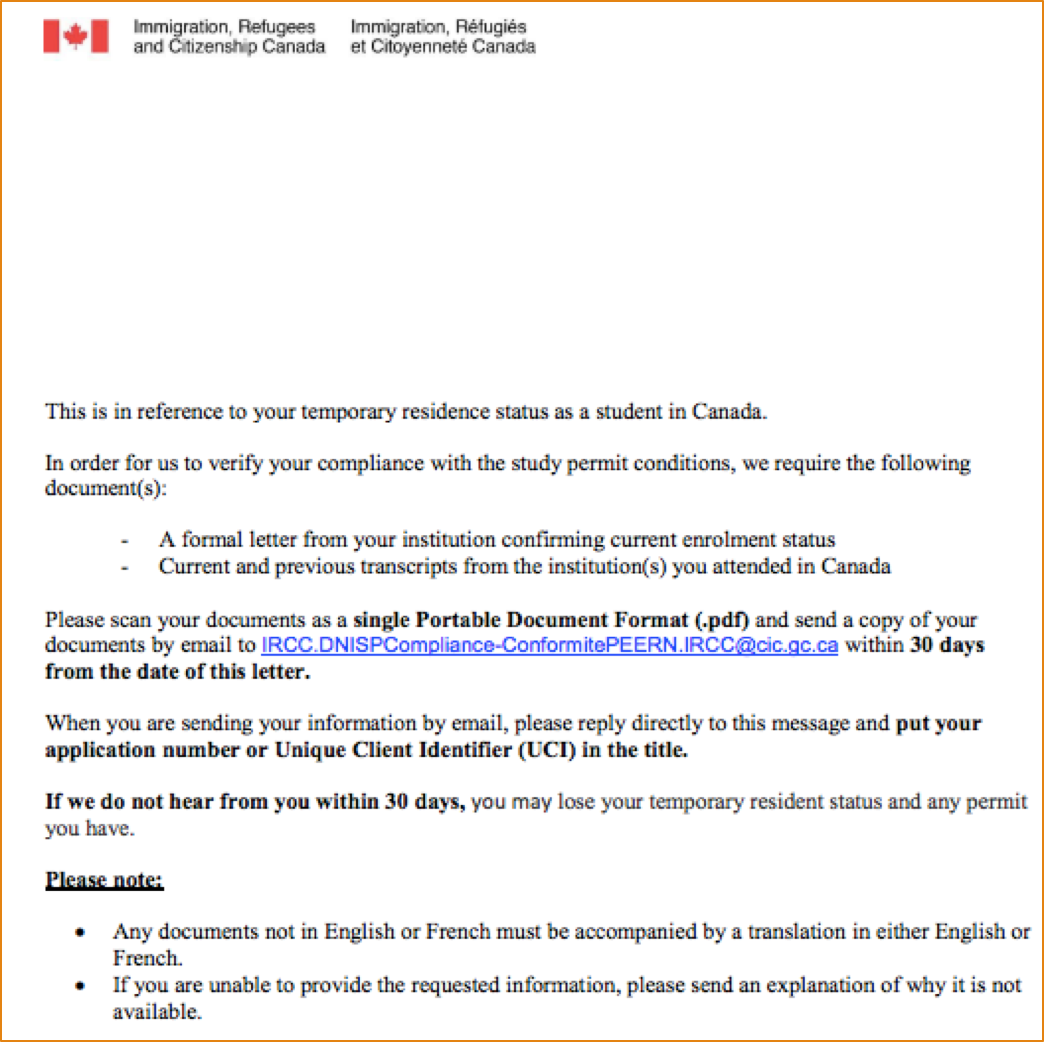 Students can then present a timeline including explanations as to why certain programs were unavailable or registration was delayed.

I also find the decision fascinating because, it does not (it appears) parse out the statutory requirements of what defines a failure to actively-pursue studies. At one point Justice Locke writes about one period of study:

[62]  First, I note that the applicant makes no reference to any authority indicating that his absence from Canada could excuse him.

The very provision of R. 220.1(1) of IRPR requires actively-pursuing studies only when in Canada on a study permit. Indeed, one of IRCC’s pieces of advice on this issue is to depart Canada or seek a visitor record if there is major gap due to issues such as illness or inability to enroll.

Finally, one thing that still needs to be resolved (in my mind) is whether this type of non-compliance can be cured by leaving Canada in the same way as other unauthorized work or study. IRCC’s Enforcement Manual – ENF 2- Chapter 11 states as follows:

If a student who has not been actively-pursuing studies leaves Canada and returns either as a visitor (awaiting the re-engagement of their studies) or at a time prior to studies commencing, can the Border Officer go back to previous periods of study and render a decision that they were not actively pursuing studies while holding their study permit. It seems like an area where there is still not absolute clarity, and I’ve certainly seen most border officer’s take the later approach. Even IRCC’s PFL letter suggests that this assessment can be made irregardless of the Applicant’s travel history.

It is also worth noting a second case came out this summer El Kamel v. Canada (Public Safety and Emergency Preparedness) 2018 FC 730 [see attached link]  occured in the context of a student who was advised by his consultant to seek to amend his study permit at the Port of Entry (likely by flagpole) where he was subsequently issued a s.44 report and exclusion order.  The Officer noted the student’s good faith action at the Border, but noted that there were no grounds for review of the decision finding Mr. E-K did not actively pursue studies.

Expect that the actively-pursuing studies issue continues to be pursued as a ground for refusing non-compliant students but in many cases capture students that border the cusp of being also unfortunate, unhealthy, or unsuccessful which the provision can also apply to.

As discussed in my last post on the Omijie case [see link here], there has been an increasing judicial scrutiny around study permit refusals. It is understandable. There are now increasing number of study permit applicants, and while Canada has pledged more seats, within a global context it cannot take all applicants. Rates of granted study permits in many countries are still very low (15% or less, and in some cases close to 5%).

Many of these applications will begin with the starting point that the visa officer will likely refuse the application and assume the applicant will not leave Canada at the end of their stay, unless the applicant can demonstrate otherwise. While this is not how the laws and regulations should directly apply, it is a reality of the over-extended demand on a Canadian study permit.

In Raymundo, a study permit applicant from the Philippines applying for Centennial College’s International Business Program was refused a study permit. He had explained in his application why he intended to return to the Philippines to start a marine transportation business. It appears he had family in Canada who would be providing financial support but Mr. R’s wife and kids would be staying in the Philippines. The Officer found that the proposed studies in Canada were not consistent with a logical study plan and that the Applicant did not demonstrate significant socio-economic ties to the Philippines.

Justice LeBlanc found that the decision was not reasonable, rendering the following lines: 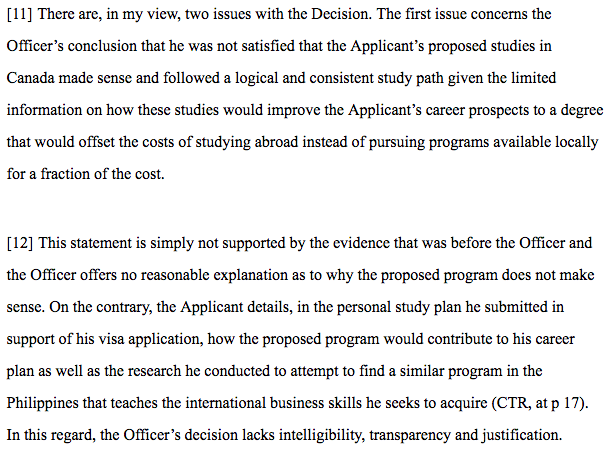 The Applicant directly addressed his attempts in his personal study plan that he tried to find a similar program, yet the program was still found not to make sense.

The Officer also took major issue with the fact that the Applicant had left his wife and son in the Philippines and that this factor was not mentioned at all in the reasons for refusal. 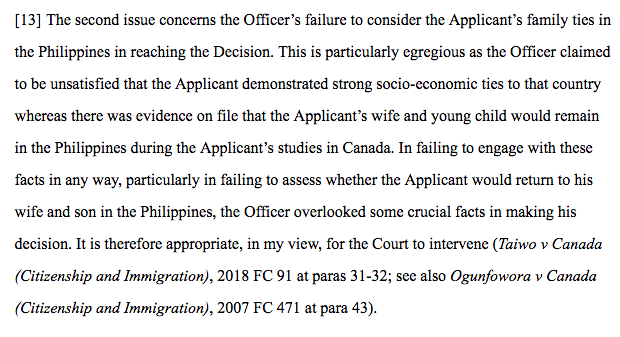 These are such common reasons for refusal that I see in many study permit consultations. Even with the Federal Court’s guidance with these cases, I still believe that visa officers will continue to refuse study permit applicants with short, trite, and little explained reasons knowing that 95% of them will either abandon their plans or re-apply to a similar refusal. I think the only way to challenge the system is to bring up these cases to judicial review.

I note a second decision this summer, Demyati v. Canada (Citizenship and Immigration) 2018 FC 701 [see link to decision] where a 18-year old Syrian national with a scholarship was refused a study permit.  Justice Roy seemed very concerned with the lack of transparency and intelligibility in concerns that the individual would not return home because of the country conditions. Justice Roy also appeared pertrubed by the type of requirements IRCC was expecting of a young student with respect to his employment history, etc. This is particularly true as parsed out in the facts presented by Justice Roy. 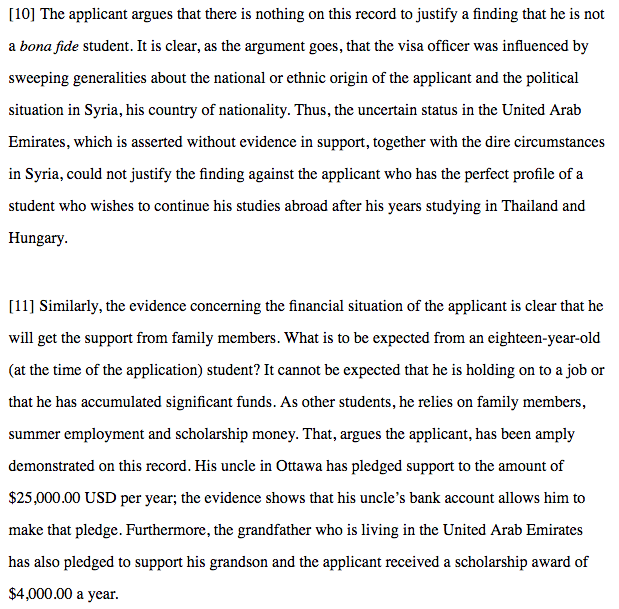 One of the key differences in this matter that the officer appeared to also go too far in presuming the Applicant would not “actively pursue studies” in Canada without pointing to any evidence. The speculative nature in which was done was criticized by Justice Roy, ironically in the context of s. 7 of the Charter which is rarely ever in the same context of international students, who have no Charter rights in a context of a study permit application. Yet, his criticism, highlights the very real concerns about arbitrary reasoning that comes with many temporary resident visa refusals.

I expect more and more judicial review of these types of decisions. It may be worth considering whether the Government eventually is better off with a per country quota system (that allows for the ceasing of intakes) as opposed to needing to find reasons to refuse applicants that often times will prima facie meet statutory requirements, pending issues about credibility or misrepresentation.

I will not break down this case too much (as it is somewhat related to what occurred in Brown above). Ms. M appeared to, likely on the cases of other students, transition from a DLI, George Brown College, that was on the PGWP list to a non-eligible DLI, Canadian College for Higher Studies (CCHS). Upon completion of that second program, it had already been 90-days + since the completion of studies at a DLI. While the Applicant tried to add to the JR record an affidavit from CCHS attaching proof that other students were successfully, this did not render the assessment unreasonable in the Applicant’s circumstances.

This case makes it even more important that students, especially who are seeking to do add-on programs or transition between institutions are aware of how this may affect their overall eligibility for PGWPs.