The High Refusal Rate for C42 Spousal Applicants at the Abu Dhabi VO: A Closer Look

I recently received some very interesting data from IRCC for a conference I am presenting at in October.

While I will be assembling a team to break down this data (with the help of a trained data scientist), I wanted to write a short piece following a long blog hiatus on probably the data statistic that on the face stands out the most from my first glance.

This stat is the high refusal rate of C42 (spouse of FT study permit holder) applicants who apply at the Abu Dhabi Visa Office in the UAE.

I have extracted the data below. 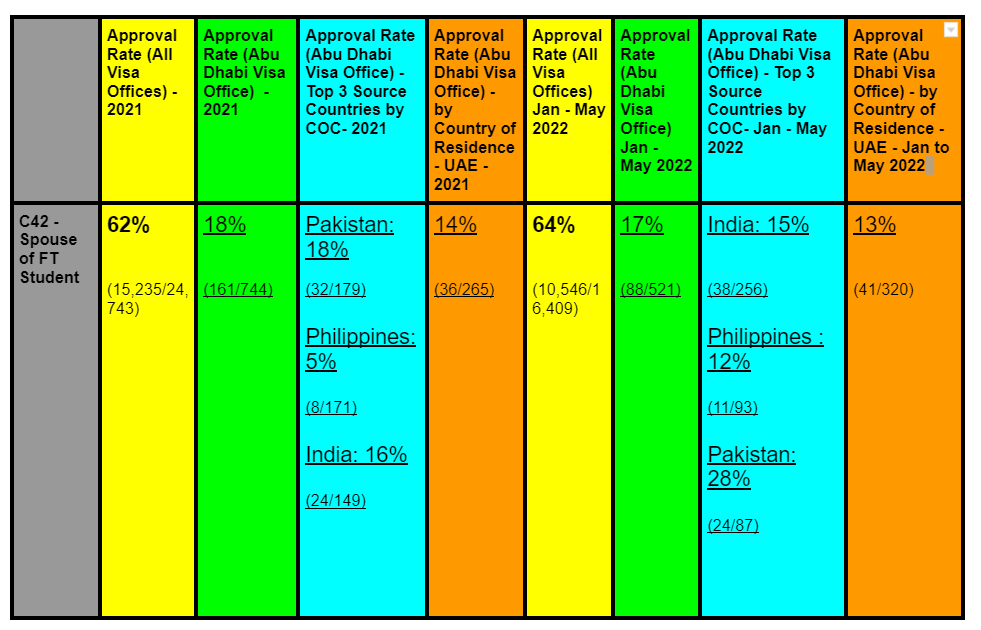 he benefit of doing both Country of Citizenship and Country of Residence disaggregations is it not only shows the major discrepancies on the face (that only 17%/18% of Abu Dhabi VO applicants are getting approved versus 64%/62% as a global rate* – excluding in Canada + Extension apps) but also to see who makes up the large majority of applicants and where do they live. While in my practice I have been quite attuned to the challenges of Indian and Pakistan applicants living in the UAE, I am definitely surprised by the number of Philippines applicants being decided in Abu Dhabi UAE.

The broader implications of this of course means that either initial applications are being refused alongside but possibly that also several families are being separated with a Principal Applicant being approved and the spouse refused. These cases have appeared on my desk quite often recently.

If I were to chalk the C42 refusals to a central reason (and again, even our refusal grounds data – isn’t disaggregated properly right now), I think the lack of citizenship and instability of residency in the UAE is a contributing factor. Many residency permits are tied to work or study in UAE by the Principal Applicant, and there are many non-Emirates in the UAE who go whole lives and generations without ever getting full citizenship. Another factor could be also the deciding of cases of non-citizens of a country at that country’s visa office. We’re increasingly learning of triaging that involves visa offices in Europe handling backlogs from Asia/Africa, and this may be a very similar case particularly for the study permits from the Philippines.

This data set was not easy to get. I had to push to get the data disaggregated and after it was received it had several mistakes. It took two months of back and forths just to get to this point.

This is probably just 0.01% of the work will need to be done. Again, I am not even a data analyst which is why I have put out the call to others in the field and am really impressed by all the responses of offers to help.

I look forward to presenting this data in October. Thanks for tuning in (as always)!