#1 – Your Application is Decided Using a Microsoft Excel Spreadsheet

It might come as a surprise to you that IRCC utilizes the classic, but with some tech additions, software of Microsoft Excel to decide temporary resident applications.

The Officer essentially provides all the information about a client in a row with several columns (including working notes – more on this later). This allows them to process multiple applications utilizing one screen. There are also multiple clients that make up the constituent rows.

Each column within a row contains information regarding the Applicant’s name, age, purpose of visit, date of receipt of the application, citizenship of the client, and previous travel. It appears that some of this information is pre-assessed by a processing Officer, but much of it comes directly from the IMM forms. 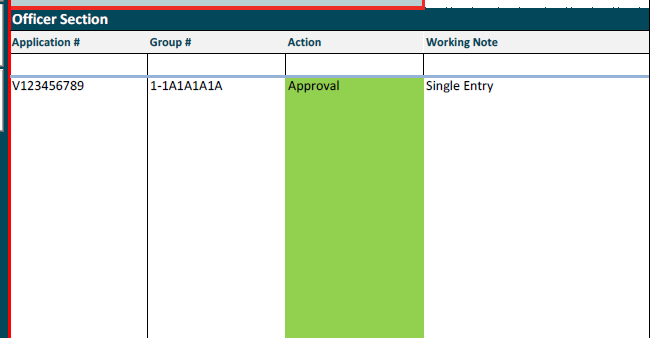 You can see here how the pre-assessment notes show up with respect to the ‘verbose client information.’ Verbose client information appears to be information directly from the forms. This suggests that the pre-assessment plans a significant and important role in an application. While it is seemingly ‘blind’ one can see from the below that if you break it down to age, gender, marital status, and citizenship that many of the personal identifying features that can make a young, single, and mobile woman applicant from Zimbabwe difficult to make to record. The Pre-assessment also shows (based on categories selected) that previous travel and proof of funds continue to be important factors. As such, it is difficult to say if travel history is as ‘neutral’ as the Federal Courts have attempted to establish it is.

Why do they do it this way via excel? Well IRCC claims that officers can increase their processing volume (depending on visa office) anywhere from 5% to 35% using this system.

I would also not be surprised (I am speculating) if the excel-based system allowed also for real-time tracking of statistics. This way a visa office with a refusal target could likely keep track while at the same time processing applications.

#2 – Reasons are Templated and Generated After Refusal. They Don’t Have to Refer to Your Original Evidence (their position, not mine)

If one were to think of it logically, or perhaps engage in the exercise themselves, it would make sense to do some sort of a yay/nay list on a chart or table and ultimately decide, based on the facts gathered, whether or not to approve a client. Indeed, while not required, much of immigration (think Ribic factors or the assessment of humanitarian and compassionate grounds) often work on this weighing system.

Such is not necessarily the case with temporary resident refusals. With IRCC’s systems, a decision to refuse or approve is made first, and then a notes generator (read: template generator) is utilized to choose the applicable reasons. The Officer then copies and pastes this into Global Case Management System (GCMS).

While Officers continue to have access to the original documents submitted by applicants, much of the guidance suggests the anchoring point is the excel document – one populated by the aforementioned pre-assessed notes and verbose client information. Officers are very much deciding to approve or refuse simply on an individual’s basic profile. This suggests that whatever is chosen to be extracted from an application, rather than what is actually in the application is most important. Such guidance should serve as a reminder to keep support letters and evidence not only strong, but visible and searchable rather than tucked away on page 12 of a 15 page submission letter.

There are also ‘risk indicators’ and ‘local word flags.’ Risk indicators can capture where there is a trend, for example, of an Office submitting fraudulent information and local word flags, capture words such as ‘wedding.’ I am still researching what the other words are, but we know they depend on what visa office runs them. It would not be a surprise to see more risk indicators and local  I would not be surprised if IRCC is also running OCRs (optical character recognition) or utilizing machine-based decision-makers to flag key words. Yet, looking at the GCMS notes of several recent files, it appears risk indicators and local word flags don’t often appear. What this may suggest, is that the Officers rely more on the pre-assessment, verbose info, and their working notes to render a decision.

Which brings us to the issue of working notes below.

#3 Working Notes of Officers (i.e. Where the Factual Analysis Takes Place) are Not Ordinarily Retained

Templated reasons themselves do not (at this stage) need to contain reference to facts in the Application. While IRCC maintains that Officers do have the right to choose not to use them, the reality is any officer facing instructions to process fast and maintain consistency, likely won’t diverge too far from them.

When clients come and find me after a referral, I often hear from them that they believe the Officer ignored evidence or turned a blind eye to something they submitted. Turns out there is likely much more to it.

Officers do have space to maintain working notes in their system, but – and importantly, these notes are not transferred to GCMS for privacy and administrative convenience purposes. IRCC claims that if they were required to manually input Officer’s working notes it would create too much of an admin burden.

Strategically though, this is a brilliant play. If decisions were to include working notes and commentary it would open up the possibility of all sorts of litigation. Thinking back in history, it was the working notes of several Officers that led to such a departmental disaster such as Baker.

The Supreme Court of Canada’s decision in Vavilov also supports short, pithy reasons that maintain consistency – essentially what IRCC is trying to do with this system.

The Majority writes at paragraph 77:

[77]                          It is well established that, as a matter of procedural fairness, reasons are not required for all administrative decisions. The duty of procedural fairness in administrative law is “eminently variable”, inherently flexible and context-specific: Knight v. Indian Head School Division No. 19, [1990] 1 S.C.R. 653, at p. 682; Baker v. Canada (Minister of Citizenship and Immigration), [1999] 2 S.C.R. 817, at paras. 22-23; Moreau-Bérubé, at paras. 74‑75; Dunsmuir, at para. 79. Where a particular administrative decision-making context gives rise to a duty of procedural fairness, the specific procedural requirements that the duty imposes are determined with reference to all of the circumstances: Baker, at para. 21. In Baker, this Court set out a non-exhaustive list of factors that inform the content of the duty of procedural fairness in a particular case, one aspect of which is whether written reasons are required. Those factors include: (1) the nature of the decision being made and the process followed in making it; (2) the nature of the statutory scheme; (3) the importance of the decision to the individual or individuals affected; (4) the legitimate expectations of the person challenging the decision; and (5) the choices of procedure made by the administrative decision maker itself: Baker, at paras. 23-27; see also Congrégation des témoins de Jéhovah de St-Jérôme-Lafontaine v. Lafontaine (Village), 2004 SCC 48, [2004] 2 S.C.R. 650, at para. 5. Cases in which written reasons tend to be required include those in which the decision-making process gives the parties participatory rights, an adverse decision would have a significant impact on an individual or there is a right of appeal: Baker, at para. 43; D. J. M. Brown and the Hon. J. M. Evans, with the assistance of D. Fairlie, Judicial Review of Administrative Action in Canada (loose-leaf), vol. 3, at p. 12-54.

IRCC is in the process (the part I am not yet at the liberty to discuss as I am assisting in the litigation) of getting judicial endorsement for their choice of process. I can say that if they are successful, and given it is well-established that the impact to foreign nationals (such as students is on the low end), this could serve as a rubber stamp. Such a process would make future judicial reviews much more difficult if the Courts find that templated reasons do not need factual reference. Furthermore, refusal letters could simply that the Applicant’s evidence was insufficient and leave it to their counsel, Department of Justice, to build up a justification after the fact.

Caution: Expect GCMS Notes to Thin at the Detriment to Your Client’s Knowledge of the Case to Be Met

What does this all practically mean for your run of the mill temporary resident applicant. Well – expect GCMS notes to say less and less and for the bulk of the information to be retained on IRCC’s ‘internal’ system. It is also likely moving forward (and that we’ve already seen in some cases) nothing in the notes for when procedural fairness letters are sent. This will make it very difficult to respond, especially where procedural fairness letters are so broadly worded. This could make the process much less transparent and lead to many more misrepresentation finding (as just one example).

I want to thank again, my incredible colleague Zeynab Ziaie for her advocacy and supporting our efforts to learn more about the way IRCC operates. I have purposely not included anything in this piece that may be subject of our litigation and is not already publicly accessible. We may be writing more about this shortly.