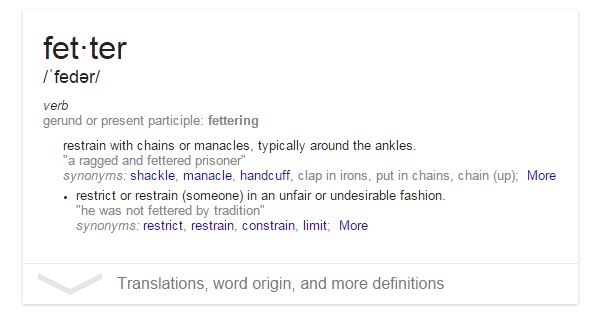 In Kanthasamy v. Canada (Citizenship and Immigration) 2015 SCC 61  (“Kanthasamy” ) the majority decision (penned by Justice Abella) found that the Immigration Officer had unreasonably fettered her discretion  by avoiding the “requisite analysis” of s.25(1) of the Immigration and Refugee Protection Act (“IRPA”). The Majority found that the Officer’s  adoption of the Citizenship and Immigration Guidelines of “unusual and deserved or disproportionate hardship” as a threshold for humanitarian and compassionate relief, without a proper assessment of best interest of the child, was an unreasonable application of IRPA s.25(1).

The questions to be asked from this are:

In TWU-LSBC, Hinkson C.J. does quite a thorough job of setting out the law of fettering discretion in British Columbia. He writes (emphasis added):

[97] Fettering of discretion occurs when, rather than exercising its discretion to decide the individual matter before it, an administrative body binds itself to policy or to the views of others: Hospital Employees Union, Local 180 v. Peace Arch District Hospital (1989), 35 B.C.L.R. (2d) 64 (C.A.). Although an administrative decisionmaker may properly be influenced by policy considerations and other factors, he or she must put his or her mind to the specific circumstances of the case and not focus blindly on a particular policy to the exclusion of other relevant factors: Halfway River First Nation v. British Columbia (Ministry of Forests) (1999), 129 B.C.A.C. 32 at para. 62 [Halfway River].

Hinkson CJ expands on this definition in paragraph 114 of his decision and writes (emphasis added):

[93] It is settled law that a body to which a power is assigned       under  its enabling legislation must exercise that power itself and may not delegate it to one of its members or to a minority of those members without the express or implicit authority of the legislation, in accordance with the maxim hallowed by long use in the courts, delegatus non potest delegare: Peralta v. Ontario, [1988] 2 S.C.R. 1045, aff’g (1985), 49 O.R. (2d) 705…

This definition of ‘fettering discretion’ is mirrored in the Majority’s decision in Kanthasamy at para 32, where the court discusses the Officer’s use of the Guidelines on Humanitarian and Compassionate Grounds provided by CIC. The Majority writes (emphasis added):

[32] There is no doubt, as this Court has recognized, that the Guidelines are useful in indicating what constitutes a reasonable interpretation of a given provision of the Immigration and Refugee Protection Act : Agraira, at para. 85. But as the Guidelines themselves acknowledge, they are “not legally binding” and are “not intended to be either exhaustive or restrictive”: Inland Processing, s. 5.   Officers can, in other words, consider the Guidelines in the exercise of their s. 25(1)  discretion, but should turn “[their] mind[s] to the specific circumstances of the case”: Donald J. M. Brown and The Honourable John M. Evans,Judicial Review of Administrative Action in Canada (2014), at p. 12-45. They should not fetter their discretion by treating these informal Guidelines as if they were mandatory requirements that limit the equitable humanitarian and compassionate discretion granted by s. 25(1) : see Maple Lodge Farms Ltd. v. Canada, [1982] 2 S.C.R. 2, at p. 5; Ha v. Canada (Minister of Citizenship and Immigration), [2004] 3 F.C.R. 195 (C.A.), at para. 71.

In TWU-LSBC, Hinkson C.J. appears to adopt a standard of review of correctness – stating that the fettering of discretion is an area where the court owes an administrative decision-maker no deference. Hinkson C.J. writes:

[99] As Mr. Justice Finch (as he then was) explained in Halfway River at para. 58, the fettering of discretion is an issue of procedural fairness, which is an area where the court owes an administrative decision-maker no deference:

[58] The learned chambers judge held that the process followed by the District Manager offended the rules of procedural fairness in four respects: he fettered his discretion by applying government policy…[.] These are all matters of procedural fairness, and do not go to the substance or merits of the District Manager’s decision. There is, therefore, no element of curial deference owed to that decision by either the chambers judge or by this Court.

In Kanthasamy, the Majority adopts the reasonableness standard of review. However, arguably this was done with respect to the decision as a whole and not directly with reference to the issue of fettering discretion:

[44]              The Federal Court of Appeal refers to one case from this Court to support this point: Hilewitz v. Canada (Minister of Citizenship and Immigration), [2005] 2 S.C.R. 706. This case is not particularly helpful. It was decided before Dunsmuir v. New Brunswick, [2008] 1 S.C.R. 190, there was no discussion of the impact of a certified question on the issue of standard of review, and the parties asked that correctness be applied: para. 71.  In any event, the case law from this Court confirms that certified questions are not decisive of the standard of review: Baker, at para. 58; Chieu v. Canada (Minister of Citizenship and Immigration), [2002] 1 S.C.R. 84, at para. 23.  As the Court said in Baker, at para. 12, the certification of a question of general importance may be the “trigger” by which an appeal is permitted. The subject of the appeal is still the judgment itself, not merely the certified question. The fact that the reviewing judge in this case considered the question to be of general importance is relevant, but not determinative. Despite the presence of a certified question, the appropriate standard of review is reasonableness: Baker, at para. 62.

I want to bring in another definition of fettering discretion (going way back to the archives here) that I like personally. I found this on a Worksafe BC memo dated 20 December 1991 but I think it sets out the law quite clearly (emphasis added):

“A general principle in administrative law is that administrative bodies must not fetter their discretion. In other words, a body entrusted with a discretion must not disable itself from exercising its discretion in individual cases by adopting a fixed rule of policy. As summarized by Jones and de Villars in Principles of Administrative Law (Vancouver, 1985): … the existence of discretion implies the absence of a rule dictating the result in each case; the essence of discretion is that it can be exercised differently in different cases. (at p. 137).”

I think eventually there will need to be two standards of review for fettering discretion cases. When an officer is fixated on the application of a policy or discretion that is narrower than the written  law – I believe that the reasonableness standard should apply. For example, as in Cha v. Canada (Minister of Citizenship and Immigration) [2005] 2 FCR 503, the Officer unreasonably fettered discretion by adopting a narrower approach (not conducting a full analysis) in reaching a decision that legally flowed from the imputed act – the issuance of an s.44 report and subsequent deportation order.   However, if the officer is fixated of a policy that is broader than, or even more egregiously, contradictory, to the law I think it becomes an issue of correctness. I think that a blanket relevant/irrelevant considerations analysis is broad for the purposes of a fettering discretion assessment (see: Gleason J’s judgment in Jia v. Canada 2014 FC 596 at para 68).

Regardless, expect “fettering of discretion” to receive more judicial play in the years to come. I know in the immigration context, several refusals (subject to litigation) are based on discretionary applications of policy and Citizenship and Immigration Canada-generated requirements rather than the plain-language of the law.

Corresponding, you will likely see from this (if I were the government) more Ministerial Instructions and Regulations that codify existing policy. The reasonableness standard itself, where as long as balancing and factor consideration was arguably attempted is sufficient, may be enough to defend the decision-maker in those cases.

Ps. for a great article on “fettering of discretion” in the Canadian administrative law context check out Professor Paul Daly’s 2014 post “Fettering of Discretion and the Reasonableness Test” here.