Much like we knew very little about #Chinook until recently, we are now learning more about a March 2020 Program Delivery Instruction [PDI] (with a June 2021 update) on a decade-old IRCC initiative called #VESPA.

VESPA has existed for a decade, but much of it’s existence has been behind relative closed doors. It was introduced to streamline processing for those from visa-exempt countries, but with the expansion of that list (via the Electronic Travel Authorization) regime and the movement towards e-APPS system large, it morphed into another ‘secret’ internal tool utilized at certain IRCC visa offices.

Now that an ‘internal only’ PDI has come to the forefront, it is an appropriate time to revisit VESPA and why I think it exemplifies the type of two-tiering of temporary residents that will become the trend moving forward. It also serves as an antithesis to Chinook, and not unlike Chinook, raises questions about why it is being kept under wraps and what the implications are if it entered greater public consciousness.

What We Knew Before – VESPA as a Pilot for Online Applications

The eligibility criteria were established as follows: 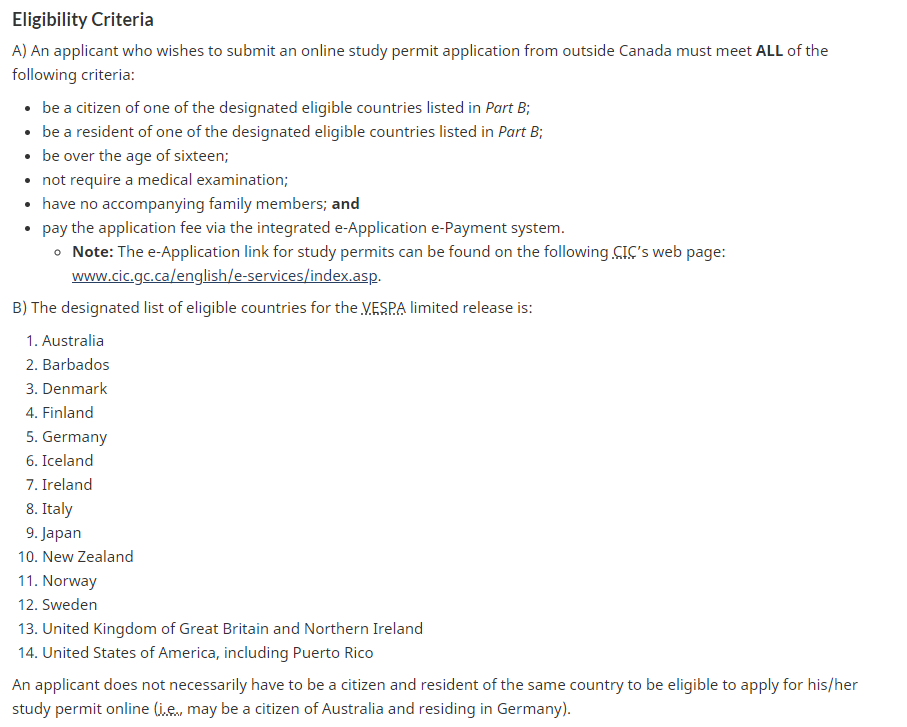 It appears that at the the time, the big ‘advantage’ of VESPA was that the applications were streamlined online. This is re-iterated in a September 2012 presentation by then CIC. 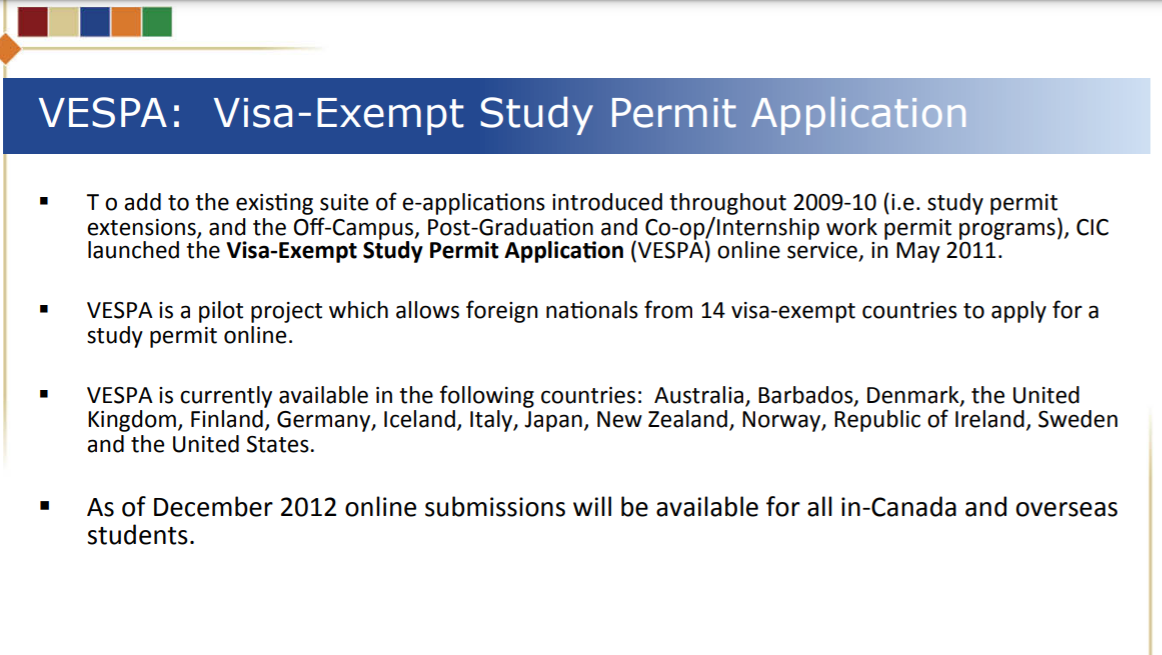 A 2015-2016 Evaluation of IRCC’s Internatoinal Student Program similarly lauded VESPA as part of a modernization initiative for workload redistribution:

There are a variety of modernization initiatives that
CIC has implemented over the past several years,
and more initiatives are planned. Many of these
initiatives are designed to have a positive impact on
the processing of study permits and study TRVs,
including e-Application, e-Medical, GCMS, workload
distribution (e.g. VESPA), VACs and other facilitation
measures for international students such as the
Student Partner Program (SPP). It is difficult to
isolate the impact of particular modernization
initiatives and report on these distinctly in relation to
processing times

Seemingly and as stated by CIC in Operational Bulletin – 486 in December 2012,  the introduction of e-Apps effectively ended the VESPA pilot.

Or so we thought.

From internal only March 2020 program delivery instructions I received from an Access to Information request, we learn that VESPA not only still exists but has transformed into an even more powerful tool.

I am sharing the instructions from the final draft versions, as the final version I received contained redactions that were answered by the draft versions. This shows the contours of what VESPA now does – streamline straight-forward applications to in-Canada processing, and ultimately supporting an approval for these applicants.

Recall, other than Barbados in the Caribbean, these countries are noticeably Global North and noticeably White. 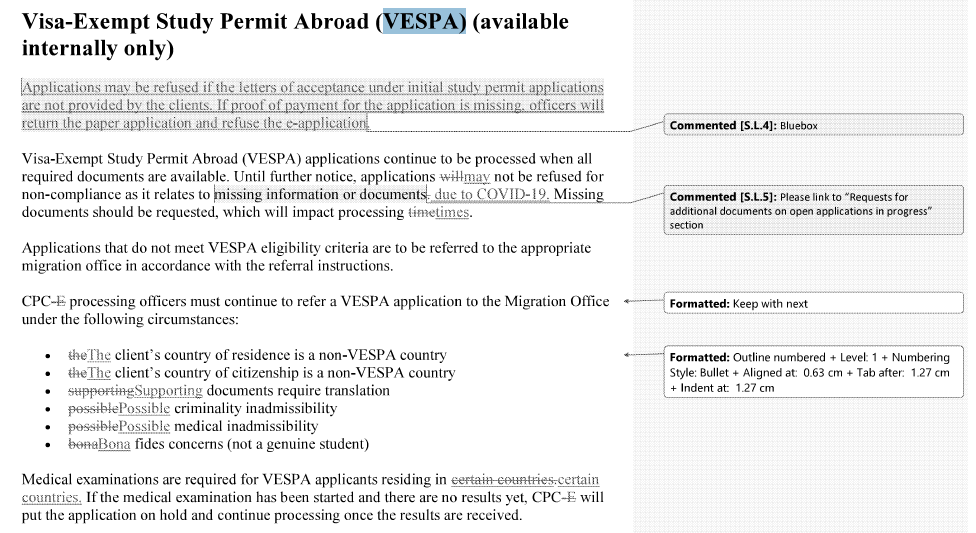 An internal email between IRCC policy folks on the removal of the age requirement, reveals both that the program is an expedited SP processing stream for citizens and residents of visa-exempt country to apply for an SP from outside Canada AND that the PDI is not accessible to the general public.

We learn that VESPA has been in the works since late 2019 and that originally it was a mission (read: visa office) specific process for low-risk SP applications.

In June 2021, the instructions were further updated to remove the age requirement as a primary change while maintaining the requirement to be both a citizen and resident of a visa-exempt country and applying electronically for a study permit while overseas. 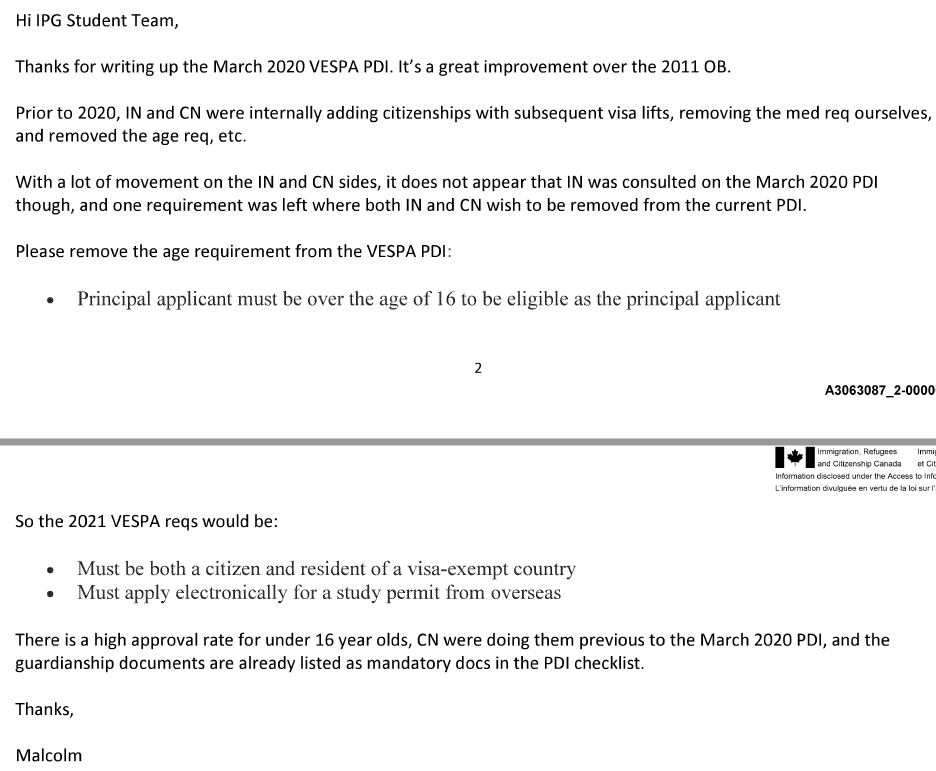 One interesting question is whether the country list has expanded and arguably it has. I am certainly interested in learning whether VESPA is now for all eTA countries and as we move forward whether this creates a proverbial splitting of approval rates. IRCC policy team’s comment that citizenships were added suggests that this list likely is much longer than 14 countries.

Our statistics from 2020, and taking into account an IRCC policy team member’s comment that VESPA is not the same as SDS, of which all the countries are visa-requiring. If we compare only the 14 countries on the original VESPA list and compare it to the SDS list (noting that not all applications from citizens of each of these countries are VESPA or SDS), this type of divide becomes abundantly clear. It also shows how VESPA files likely do not contribute the same type of volume that SDS contributes.

Citizens from VESPA countries had a 96% study permit approval rate in 2020 (Jan – Nov), with only Iceland’s approval rate deviating from the 90%+ norm. Meanwhile SDS countries produced a below 50% approval rate. I do not have the SDS approval stats, but again I would be grateful if anyone could provide those to me.

What VESPA suggests to me, alongside what we are learning more about from Chinook, is that your vital statistics – what citizenship you hold, where you live, and what you are applying for may ultimately become the determinants for whether or not you are approved in Canada.

VESPA raises many questions: namely, why is preferential treatment being given to folks who may not even hold eTAs and never been to Canada, but those who hold TRVs are often being refused study permits? We know programs such as CAN+ exist but these have not factored into study permit refusals, which refuse often on the change in purpose from visiting to studying.

On that point, other than the eTA being more accessible than a TRV and easier to obtain, in what ways does VESPA actually speak to the merits of a study permit applicant?

Study permit applicants must demonstrate per R.216(1) IRPR that they will leave Canada the end of their authorized stay. They are refused, however, largely on their intention to study, their employment and career prospects, their family ties, the availability of their financial support, their travel history, and their immigration status.

There’s very little in VESPA nor in a logical sense, to suggest that a student from a Global North/largely White country is a more genuine/bona fide student able to facilitate their ability to leave Canada at the end of their stay. In essence, VESPA has removed the study permit considerations out of the study permit for those who are on the current, undisclosed, list.

A final question I would raise is – why is this program being held under wraps and internal only? Much like #Chinook which I still view and see as IRCC’s refusal mechanism for Global South applicants in high volume countries, the antithesis #VESPA seems to be the privilege pass.

Why not disclose that certain countries hold privileged status (I mean, we already have an eTA/TRV required list)?

Is there something about these instructions that fundamentally does not accord with what the public might perceive – i.e. – that VESPA undermines the very foundation of the study permit regime by granting approvals for folks who do not need to even demonstrate their ability to meet the requirement of the Act and Regs?

Lots of food for thought. Perhaps I have opened up a lid of something that was brewing deep in IRCC’s fridge. It’s time to check out what’s actually in the pot.